In a country as large as Europe where 90% of the surface is covered by water, airlines have an essential role. And this, for all that concerns the details of daily life. By being at the heart of the life of the islands of French Polynesia, Air Archipels is a key player in its sector.

more than 26 years of existence,

Referent for medical flights, private flights and all destinations in Polynesia (except for Ua Pou and Ua Huka airfields)

The Air Archipels team is able to get a crew off the ground in 45 minutes, 7 days a week, 24 hours a day. Indeed, it is accustomed to implementing flight organizations requiring very high reactivity for medical evacuations. Thus, the company can put in place the means necessary to satisfy your requests.
Its objective: to take you to your destination when you want, in complete safety and as comfortably as possible. Its experience, its knowledge of the territory and its daily activities undoubtedly make it the airline best able to meet your expectations in terms of private air transport in French Polynesia.

The reference service provider for Polynesia

Air Archipels is the only service provider for Air Tahiti, a local airline that provides regular inter-island connections. The experience and practice of these islands by the pilots of Air Archipels make them professionals of reference on these destinations. The airline Air Archipels is also in charge of serving certain remote islands of the Tuamotu, on behalf of Air Tahiti.

Having to be able to intervene quickly and permanently in the event of an emergency, the company Air Archipels has acquired the human and material resources necessary for its activity and its quality of service. With a fleet of 4 planes and 10 pilots, it is the largest private airline in French Polynesia. Its means associated with its experience, its quality of service and its responsiveness make it quite logically a provider of choice for all private and public customers wishing to benefit from à la carte private flights in French Polynesia.
Whether for professional or pleasure flights, the company is able to adapt to all requests in terms of destination or capacity. 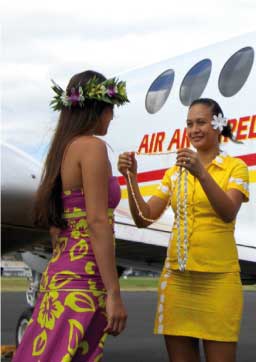 Values inherent in our service and quality requirements

Flexibility, responsiveness, efficiency, discretion, security: private air transport cannot be detached from certain values that we are committed to nurturing and promoting.
Our flexibility allows us to adapt to your expectations and needs. It is essential for us to adjust to all the requests of our customers, in compliance with security requirements.
Our responsiveness makes us a key player for all situations and a contact of choice for last-minute situations and emergencies.
Our efficiency gives us the opportunity to optimize your schedules in full compliance with the security requirements related to the exercise of our profession, thanks to the flawless organization of our teams and our employees.
Discretion, essential and indispensable to our business, is a moral commitment of all our teams towards our clients, whoever they may be.
Finally, safety , inherent in any activity related to air transport, is of course our priority and at the center of all our decisions. It remains the top priority.
These values are the cornerstones of our activity. Everything in our corporate culture and in our organization is designed with respect for them. The unrestrained involvement of our teams is also intimately linked to them.

1996: Air Archipels is created as a subsidiary of the local inter-island transport company Air Tahiti. The objective is to provide French Polynesia with a company on a human scale offering the responsiveness and operating flexibility necessary to take charge of emergency medical evacuations.
The company operates a Cessna Conquest C441. Its main activity is to carry out medical evacuations between the islands and Tahiti.

1997: The arrival of a Beechcraft in the fleet makes it possible to offer its customers a “VIP” version flight-on-demand service.

2006: With the arrival of a third aircraft, the Air Archipels fleet is made up of 3 Beechcraft Super King Air B200s. The company operates flights to the Tuamotu on behalf of Air Tahiti.

2011: Air Archipels takes over the opening up activity in the Marquesas. The fleet is now made up of 3 Beechcraft Super King Air B200 and 2 Twin Otter DHC6-300.

2016: Air Archipels is 20 years old, the activity is dense on the three core businesses of the company: EVASAN, regular Air Tahiti flights and charters

2021: The Marquesas Islands Ua Pou and Ua Huka are allocated in operation to another operator than Air Tahiti, Air Archipels separates from the Twin Otter DHC6-300 in favor of the purchase of two new aircraft.

2022: Air Archipels innovates and equips its fleet with two new aircraft: a first Beechcraft 260 arriving in January and a second whose arrival is expected soon.

Notoriety, references, substantial human and material resources, extensive experience, unfailing professionalism, recognized service, values: we are undoubtedly able to provide the most suitable solution for your projects, whether for pleasure trips or business trips. Contact us, let us work for you, and benefit from our know-how.